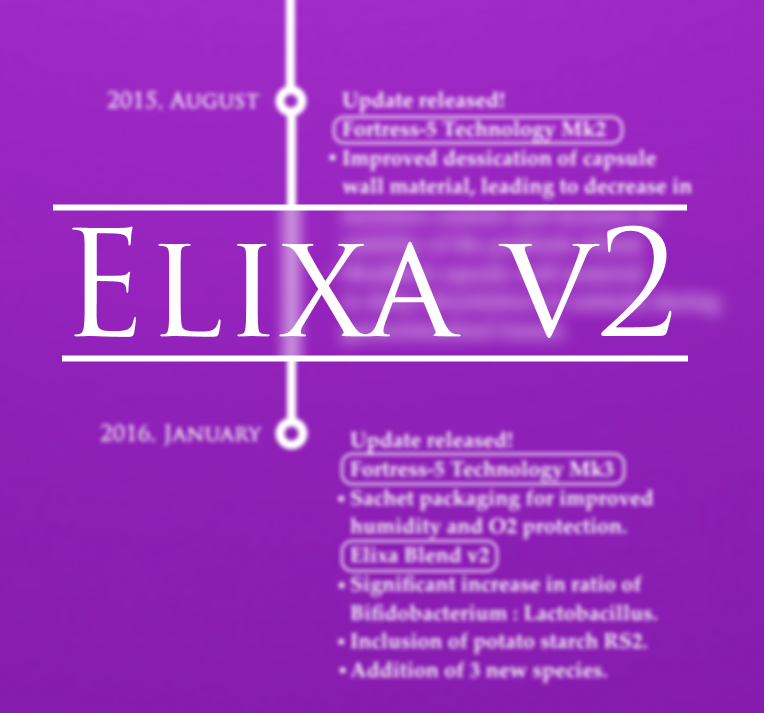 Being the manufacturer of Elixa and having the awareness of the product grow primarily online is a golden pairing that perhaps wasn’t possible a decade or two ago. These two factors present an exciting combination because (1) being the manufacturer gives me the ability to tweak and upgrade the product at an unprecedented turnaround time steered by… (2) feedback from anyone in the world at light speed and the ability to be involved with online discussions that anyone can get involved with.

In the past, the consumer goods business was more about creating a finalised product and then convincing people that this is what they need and contriving all marketing to the various features of the product, despite the fact that some of those features were either purely incidental, for an ulterior purpose (logistics, manufacturing, storage), or determined by the available technology at the time.

What I prefer – and how I view Elixa – is to create a tool, release it for people to experiment with, and monitor what benefits it provides and how exactly it is being used. Much like the software industry with betas and regular updates. People have used Elixa according to many different protocols and for a huge range of conditions – many of which I had no idea the first iteration would help with. I absorb all the feedback and use it to accumulate into something more than just a folder of testimonials: i.e. data that influences the next iteration of the product.

You can view Elixa as two separate components: The delivery system – which is a fancy way of saying ‘the capsule’ – and the blend of probiotic bacteria.

So far I have made two updates to the former. I called the first update Mk2 and the second update Mk3, to distinguish between updates to the capsule (MkXX)and updates to the blend (vXX). These occurred back in August (2015) and I didn’t go into detail about what they were at the time, so I will do that here. I’ll describe them in an objective manner and you can judge whether they are improvements or not. I don’t want to state categorically that an upgrade is superior. Results will be the judge of that. But we can probably agree that these updates make a lot of sense.

Mk2 was two changes at once. Firstly, we now utilise a baking process for the capsules (prior to insertion of the probiotic blend) to reduce humidity within the capsule shell. When I say ‘humidity’ I am not talking about changing something from wet to dry. Capsule shells are, from what a human can observe, completely dry. However many substances will contain a certain trace amount of moisture and the baking process removes that. This results in a reduction in humidity ingress (once again – we’re talking trace amounts) from the capsule shell into the powder blend inside the capsule. This maintains an even higher degree of desiccation of the lyophilised powder. That’s a good thing, since tiny amounts of humidity can lead to tiny amounts of ‘re-hydrated’ bacteria. Rehydrating the bacteria prematurely is the main factor that affects the difference in viable CFU count of a probiotic between time of manufacture and time of consumption. Any bacteria that are re-animated before they are in your gut, will soon use up all available energy sources and perish – thus creating the discrepancy between ‘CFU at time of manufacture’ and ‘CFU at time of consumption’. 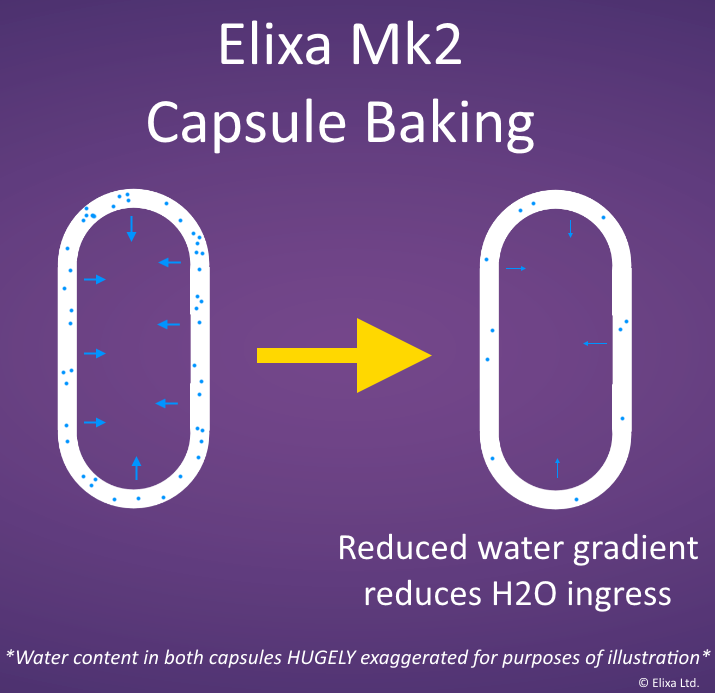 The second part of Mk2 was more significant. We increased the gastric resistance of the capsule shell. The tech specifics are not something I’ll detail, which was perhaps a reason I didn’t make any fanfare about these updates when they first came out, because if you can’t elaborate when asked about it then why mention it to begin with?

But fortunately I’ve been saved from that necessity because the results of this increase in gastric resistance have been so evident that I receive regular emails and blog comments stating that some users can see the capsule shell in their stools from time to time. i.e. the two halves of an emptied capsule shell. This implies a much later dispersion of the blend within the GI tract if the shell is making it all the way to the exit without having completely disintegrated! Having the blend deposit closer to the large intestine and further away from the stomach is a core aim of any probiotic delivery system.

To sum up – this update was far better than I ever imagined!

While we can’t know for sure where exactly the blend disperses for everyone, everytime – this would have to be established on a person-to-person, event-by-event basis via use of scintography – I am extremely confident that it disperses further along the gastrointestinal tract than Mk1 did. 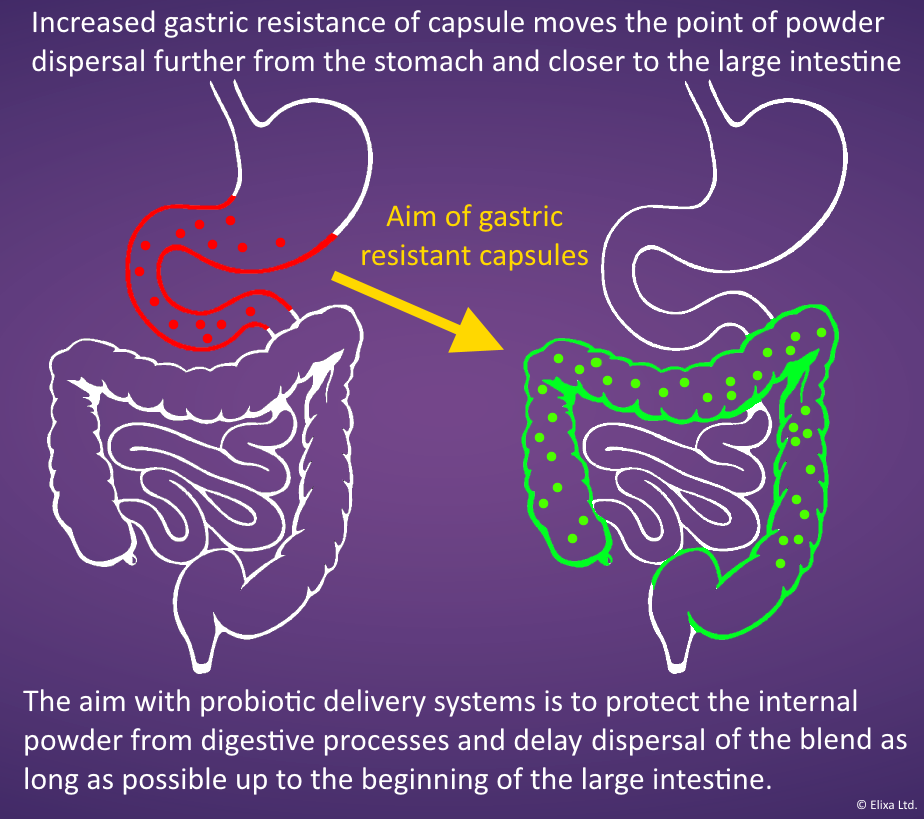 The upgrade to Mk3 was the switch from tubes to sachets, that many have now seen. These sachets are a laminate including Aluminium – or Aluminum [US] – as one of their layers. 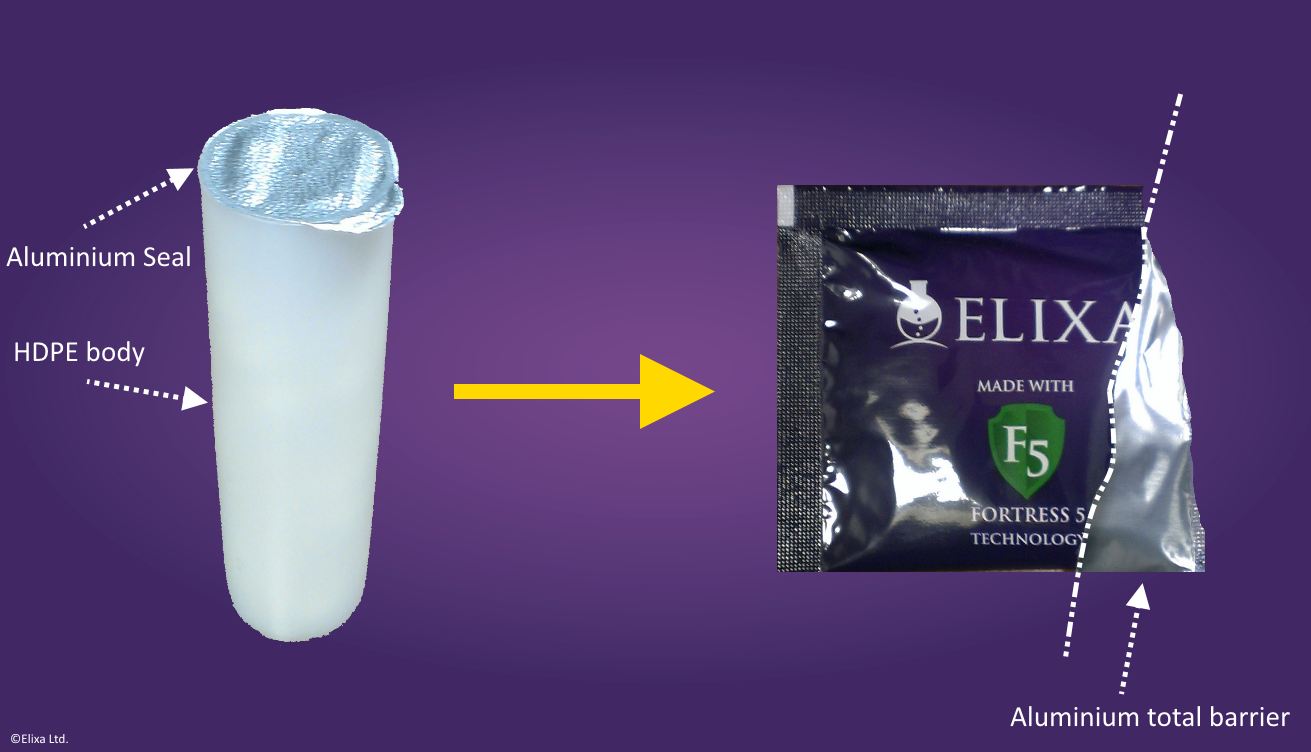 Aluminium is a total barrier to humidity and oxygen ingress. The tubes used before these sachets were, for most intents and purposes, a total barrier also. The foil seal certainly was. The walls were HDPE though, so technically this can allow trace humidity through. Having said that, they were 1.5mm thick and you’d probably have to have them in a pressurised steam room for months to measure any difference! In any case, be assured by the knowledge that I use every means at my disposal to keep the Elixa packaging several steps ahead of the average supplement packaging on the market.

For anyone wondering, when we talk about trace humidity we are talking about the occasional molecule of water passing across a barrier. We’re not talking about visible water or any kind of dampness that a human could detect.

The sachets are absolutely locked down. You can put them at the bottom of the Mariana Trench and they’ll be dry as a bone on the inside.

Now that all the delivery system talk is out of the way, we can discuss what will be the future of the probiotics industry:

A huge portion of the effect of a probiotic supplement is determined by the species of bacteria you have within the blend.

The current state of the art is nothing in comparison to what is coming in the next few years. There are so many entire genera that we have not even utilised in probiotic supplements yet. For good reason – not all bacteria are easy to culture and lyophilise (freeze dry). Lactobacillus and Bifidobacterium are common for a reason. Lactobacillus are particularly common because they are not as sensitive to oxygen compared to other intestinal flora. This makes them robust during the manufacturing process. Not only that, they can also act as a ‘buffer’ when used in a blend with other more O2-sensitive bacteria (e.g. Bifidobacterium).

My ambition in the very near-term for Elixa was to create a predominantly Bifido blend. The first iteration (v1) contains a ton of the stuff! But a large portion is still occupied by Lactobacilli. Not that I have anything personal against the Lactobacillus genus; I just don’t think they are the knights in shining armour of the gut flora. Some species have useful roles to play, but Lactobacilli are not the backbone of a healthy microbiota (and no one genus is).

Like I said, they are useful for certain things and are also helpful during the manufacturing and encapsulation process to make a stable blend.

This is where the v2 update comes in. The most significant upgrade comes from a reduction in the Lactobacillus genus and a great increase in the Bifidobacterium genus in the finished blend. Although both genera can produce d-lactate as a metabolite, cases of excessive d-lactate production are almost always characterised by an excess of the Lactobacillus genus (see cases of Short Bowel Syndrome as examples). So to pack the same CFU with a reduction in d-lactate output, Bifidobacterium should be increased. Many reasons, including the exclusive use of the bifid shunt metabolic pathway, leads to the conclusion that Bifidobacteria has a lot more mileage for improving the health of the gut versus Lactobacillus.

Am I saying this is undeniably an improvement for everyone, regardless of their pre-existing microbiota? We’ll see. People’s results will answer that question. A hundred or so people in the UK have already tried it and the feedback has been almost entirely indicative of an improvement across the board, versus the v1 blend.

But remember that how a probiotic affects you is a function of the specific blend combined with your specific incumbent microbiota (the pre-existing flora in your gut). So that’s why Elixa can have dramatic benefits for some and mild/subtle benefits for others. So, despite a decrease in overall Lactobacillus CFU, I decided to incorporate 2 additional species from the Lactobacillus genus: L. Helveticus and L.Salivarius, and 1 additional Bifidobacterium species: B. Infantis. 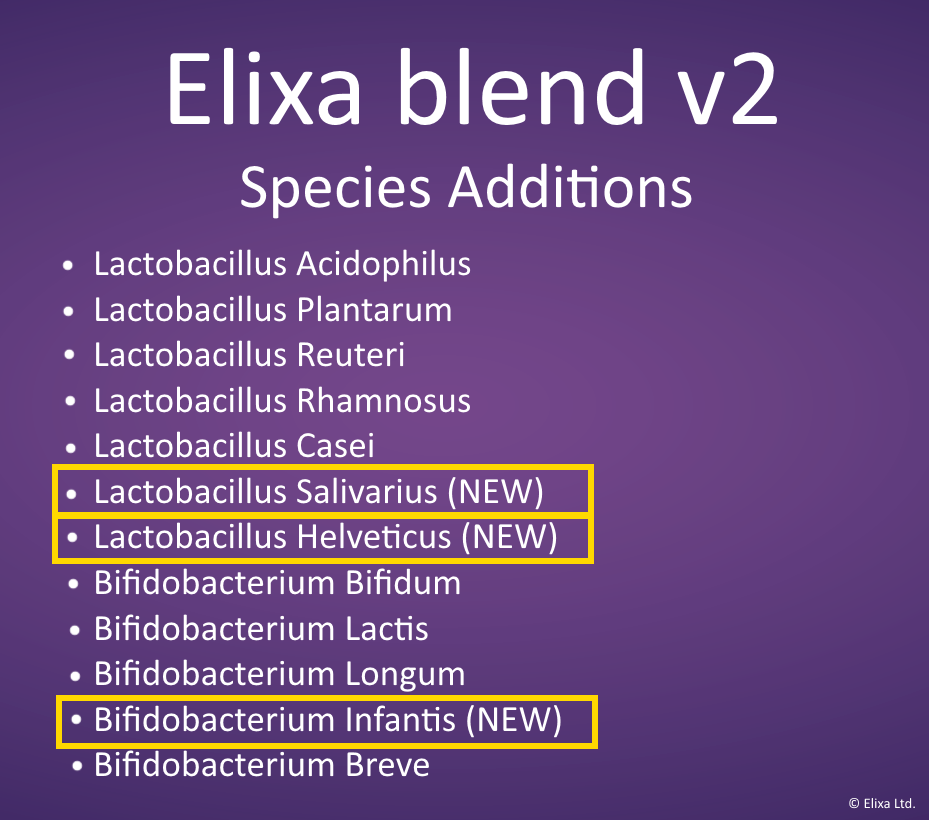 I think that expanding the range of species in the blend is likely to increase the range of dysbiotic flora that it can target due to the increased variety of competitive mechanisms and bacteriocins that will be produced.

The third and final change is the addition of potato starch within the capsule. Potato starch is a popular form of resistant starch (RS2) which has been demonstrated to have good adhesion qualities for probiotic bacteria. Link here: http://www.ncbi.nlm.nih.gov/pmc/articles/PMC93045/

This is usually proposed as a method of improving their transit by acting as some kind of protective taxi ride through the GI tract. But, more specifically, I think the usefulness comes from the ‘taxi’ being a food source (for the amylolytic strains) thus aiding their process of re-animation and subsequent cell division when they become rehydrated.

I have not incorporated RS2 for its prebiotic attributes for the gut microbiota as a whole. Only for the Elixa blend species that are encapsulated alongside it. I do not think that the quantities of RS2 involved would make the prebiotic effect significant on a gut-wide scale.

As the capsule begins to disintegrate, somewhere along the digestive tract, fluid enters the capsule and mixes with the dry powder. This rehydration begins the process of re-animating the bacteria and allows the potato starch to become easily adhered to and metabolised. (Moisture is necessary. Dry powders/grains don’t easily get broken down by bacteria.)

The bacteria now have a surface to divide upon and a food source to fuel said division. This is, at the least, a more hospitable environment for them to wake up to from their hibernation – as opposed to being thrust into a potentially bacteriolytic, quagmire of inedible substances if they were unlucky with the location of capsule disintegration along the GI tract.

Hopefully the bacteria will be experiencing their waking minutes more like a joey in a pouch: 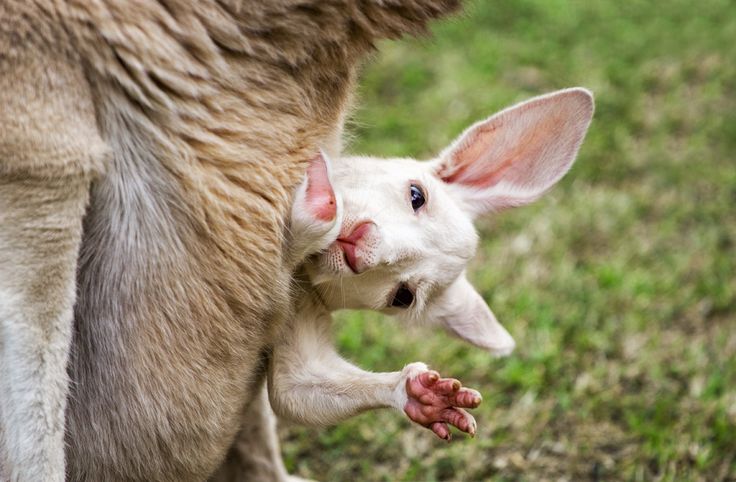 And less like hatching sea turtles with their Omaha-esque gauntlet. 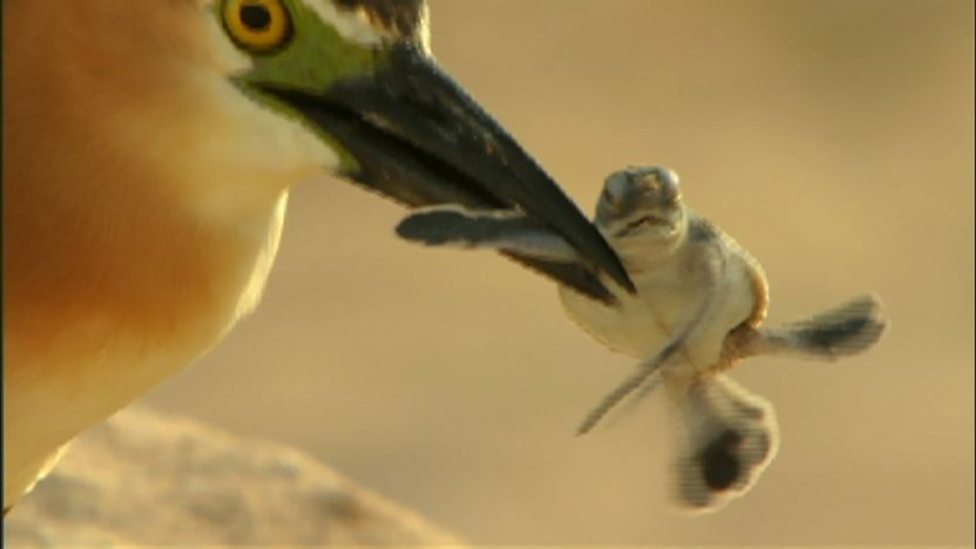 So to conclude – the changes from v1 to v2 are as follows:

1. A significantly higher proportion of Bifidobacterium compared to Lactobacillus.

3. The replacement of rice powder with potato starch powder. The latter being a popular form of resistant starch (RS2) which has been demonstrated to have good adhesion qualities for strains of Bifidobacteria.

I look forward to hearing your experiences with the new blend!